Here are the latest updates:

A total of 7,144 people were evacuated from four Ukrainian cities on Friday, President Volodymyr Zelenskyy has said in a televised address, a sharply lower number managed than to leave in each of the two previous days.

Zelenskyy accused Russia of refusing to allow people out of the besieged city of Mariupol and said Ukraine would try again to deliver food and medicines there on Saturday.

Treasury Secretary Janet Yellen has said that the US economy was strong while acknowledging that inflation was a problem and there would be spillovers from sanctions against Russia.

She also said that a tighter monetary policy to fight inflation could cause recession, but she had confidence in the Federal Reserve’s ability to balance that.

The United States has accused Russia of violating nuclear safety principles, saying it was concerned by “continued Russian firing on nuclear facilities” in Ukraine but added that there were no signs detected yet of any radiological release.

“We are monitoring reports of damage to a research facility in Kharkiv. Near-term safety risk is low, but the continued Russian firing on nuclear facilities must cease”, US Energy Secretary Jennifer Granholm said on Twitter.

Britain has said Russian air and missile forces had conducted strikes in the past 24 hours against western Ukrainian cities of Lutsk and Ivano-Frankivsk.

Find out more about the UK government’s response: https://t.co/Di8gwToXVp

Satellite images have shown that Russian military units were continuing to deploy closer to Kyiv and actively firing artillery towards residential areas, a US private company said.

According to Maxar Technologies, multiple homes and buildings were on fire and widespread damage and impact craters were seen throughout the town of Moschun, northwest of the Ukrainian capital Kyiv.

United States Secretary of State Antony Blinken and his Ukrainian counterpart Dmytro Kuleba shared concerns over Russia’s “disinformation campaigns” during a phone call on Friday, the State Department has said.

The two top diplomats spoke hours after the UN Security Council convened at Moscow’s request to address Russian allegations that Kyiv was developing a biological weapons programme, claims that Washington has forcefully rejected.

“That’s why we have so [many] consequence among civilian populations,” Matviichuk told Al Jazeera.

She added that the center also has gathered evidence of deliberate Russian bombings of civilian infrastructure and humanitarian corridors along which civilians are seeking to leave conflict areas. Russia has denied it targets civilians.

The chief prosecutor of the International Criminal Court (ICC) has opened an online portal to gather evidence of war crimes in Ukraine.

Prosecutor Karim AA Khan said in a statement that he is “closely following the deeply troubling developments in hostilities”, after recent reports of Russian attacks on hospitals and other civilian infrastructure.

Electricity supplies to the plant, which is currently under Russian control, were cut off entirely earlier this week, the International Atomic Energy Agency (IAEA) said in a statement.

“Ukraine’s regulatory authority said work that began on the evening of 10 March had succeeded in repairing one section, but off-site electrical power was still down, indicating there was still damage in other places,” the statement said.

US sanctions Russians over support for N.Korea weapons programme

The US has announced economic sanctions against two Russian individuals and three entities over their support for North Korea’s weapons programme.

The sanctions target “a network of Russia-based individuals and entities complicit in helping the DPRK procure components for its illegal ballistic missile systems,” the Treasury Under-Secretary for Terrorism and Financial Intelligence, Brian Nelson, said in a statement, referring to North Korea’s official name, the Democratic People’s Republic of Korea.

Money transfers from abroad will be paid only in roubles, Russia’s central bank says

Russians receiving money transfers from foreign banks will only be allowed to withdraw the cash in roubles, the central bank has said, the latest move in a bid to cope with Western sanctions.

The bank said the new temporary measure would come into effect on Saturday. It did not give an end date.

The bank said on Tuesday that until September 9, banks could not sell hard currency to Russian citizens.

The US has announced more sanctions on members of Russian President Vladimir Putin’s inner circle, as well as oligarchs and others who backed Russia’s invasion of Ukraine.

The Treasury Department said in a statement that three family members of Kremlin Spokesperson Dmitry Peskov were targeted by the sanctions, as was the management board of the sanctioned VTB Bank.

Twelve members of the Russian Duma were also blacklisted, the department said.

The leaders of Russia and Belarus have agreed that Moscow would supply its neighbor with the most up-to-date military equipment in the near future, the official Belarus Belta news agency said.

Belta also said that Russian President Vladimir Putin and Belarus leader Alexander Lukashenko agreed at their Kremlin meeting on joint steps for mutual support in face of Western sanctions, including on energy prices.

The news agency did not provide additional details.

US Defense Secretary to attend NATO meeting in Brussels

US Secretary of Defense Lloyd Austin will attend a meeting of NATO defense ministers in Brussels on March 16, Pentagon Spokesperson John Kirby has said.

“We can expect the defense ministers to talk seriously about what NATO is doing to better shore up its defences,” Kirby told reporters.

Austin also will later travel to Slovakia for further discussions with leaders there, Kirby said.

US President Joe Biden is set to sign a spending bill that contains $13.6bn in emergency military and humanitarian aid to Ukraine. The US Senate gave final approval to the bill late on Thursday, sending it to Biden’s desk for final approval.

“We’re giving the Ukrainians billions for food, medicine, shelter, and support for the over two million refugees who have had to leave Ukraine,” said Senate Majority Leader Chuck Schumer.

Read more on the legislation here. 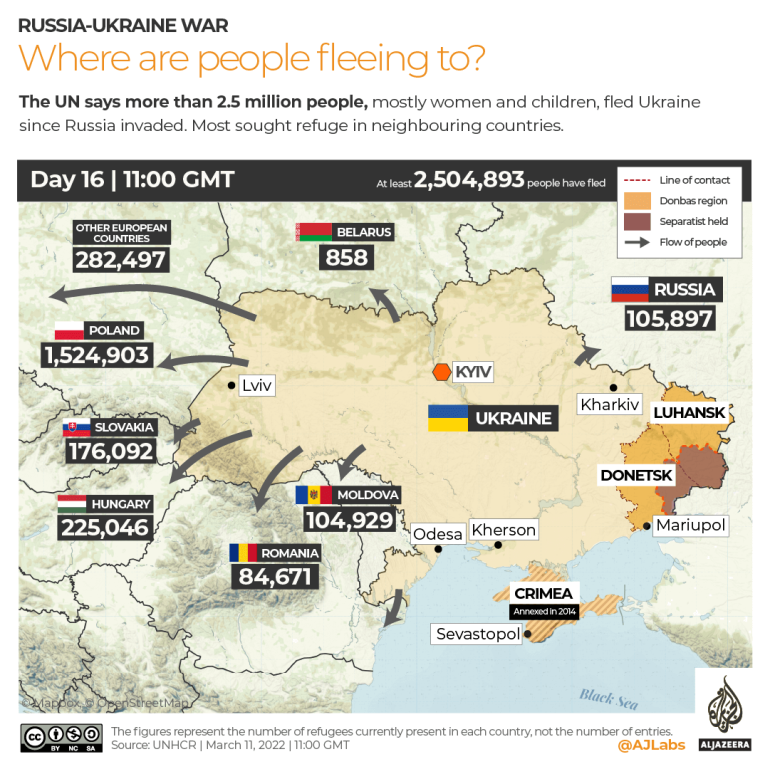 The world’s most used streaming video service said Russia’s invasion of Ukraine now fell under its violent events policy and violating material would be removed.

YouTube Spokesperson Farshad Shadloo said the blocking of the Russian outlets was in line with that policy.

In a video, Vereshchuk said some planned evacuations were successful, including 1,000 people who were evacuated from the village of Vzelzel, in the Ukrainian capital area.

Russian forces have laid siege to Mariupol, and Ukraine says 1,582 civilians have died there since the invasion began.

Welcome to Al Jazeera’s continuing coverage of the Ukraine-Russia crisis.

Read all the updates from Friday, March 11, here.