US asset manager Oaktree Capital is preparing an offer for Chelsea as the race to buy one of Europe’s biggest football clubs hots up after Roman Abramovich’s two-decades-long ownership nears an end.

The $166bn asset manager, run by Howard Marks in Los Angeles, is planning to bid alone, although it could still become part of a wider consortium, according to two people with knowledge of the plan.

Oaktree joins a group of American billionaires and sports moguls racing to assemble offers for Chelsea in a process led by investment bank Raine Group. Bids are due by Friday.

Oaktree has already made a couple of forays into football. It provided debt finance to a Luxembourg-based company that owns Chinese retailer Suning’s stake in Italian football club Inter Milan.

The group was also among investors competing to partner with France’s Ligue 1, the country’s top league, and owns French Ligue 2 club Caen.

The sale of Chelsea is a rare chance for investors to buy one of the big six clubs in the English Premier League, the richest domestic football competition in Europe, and one with a global audience.

The auction has attracted the interest of billionaire investors including Todd Boehly, co-owner of the Los Angeles Dodgers baseball team, and Josh Harris, the US billionaire and former top executive at Apollo Global Management.

The Ricketts family, which owns the Chicago Cubs baseball side, said on Wednesday that it was leading an investment group that plans to bid for Chelsea on Friday. Ken Griffin, the billionaire hedge fund manager and founder of Citadel, is part of the consortium, his spokesperson has confirmed.

However, the sale of the club requires a special license from the UK government, which has already made allowances for Chelsea to continue playing matches despite being owned by an individual placed under sanctions.

The government has said Abramovich cannot benefit from the sale of the club, which he bought in 2003. He had already planned to waive the £1.5bn owed to him by Fordstam, the UK entity through which he owns Chelsea, and pledged to donate net proceeds of the sale to charity. 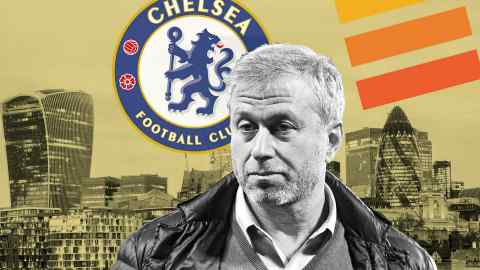 Abramovich put Chelsea up for sale before the UK hit him with last week sanctions and froze his assets because of his ties to Russian president Vladimir Putin. While the club is still fulfilling its fixtures against other teams, the UK government has blocked it from selling new tickets and merchandise.

The EU has added Abramovich to an asset freeze and travel ban list as part of a wider set of fresh sanctions this week.

Putin’s invasion of Ukraine has brought renewed scrutiny of oligarchs, whose assets range from property to planes, yachts and sports teams.

The war has also forced the world of sport to confront the origin of the fortunes that the Russian elite have poured into the industry, from Formula One to football.

Nigel Huddleston, the UK sports minister, said this week that football can “manage perfectly well without Russian investment”, pointing to interest from investors around the world.

Scoreboard is the Financial Times’ must-read weekly briefing on the business of sport, where you’ll find the best analysis of financial issues affecting clubs, franchises, owners, investors and media groups across the global industry. Sign up here.