Joe Biden approved the delivery of new US weapons systems to Kyiv, including sophisticated armed drones, after Volodymyr Zelensky, Ukraine’s leader, made an impassioned plea to Congress for more military support to defend his country against Russia’s invasion.

Biden’s announcement of further help for Ukraine’s military, which the Pentagon valued at $1bn, fell short of Zelensky’s request for the US and Nato to embrace a no-fly zone or directly supply fighter jets to the country.

But the aid package is a significant escalation by Washington and marks the first time the US has sent armed drones to the Ukrainian military since the Russian invasion last month. Ukrainian forces have used Turkish-made drones with great effectiveness to hobble the Russian advance.

“They’re designed to deliver a punch,” said a senior US defense official of the 100 drones to be delivered, adding the new aid package includes anti-aircraft and anti-armour missiles needed by Ukrainian forces.

Still, Biden’s announcement highlighted the gap that still exists between Kyiv’s demands and what Washington and its European allies are willing to provide.

Speaking by video link to US lawmakers on Wednesday, Zelensky personally appealed for Biden to show more leadership in helping Kyiv fight off the Russian assault, specifically asking for a US-led no-fly zone over Ukraine or the delivery of fighter jets — both measures the White House has ruled out.

Zelensky’s address appeared to change the calculus among some members of Congress, including several from within Biden’s own Democratic party, who urged the president to reconsider his decisions.

Mike Quigley, a Democrat on the House intelligence committee, said: “We must stop quibbling over logistics and get fighter jets to Ukraine and protect the skies over humanitarian corridors.”

The Pentagon has been reluctant to provide Zelensky any military assistance that could pull Nato into a direct war with Russia. Biden said the US and its allies remained “fully committed” to increasing military support for Ukraine, which has staged a resistance to Russian forces that has exceeded expectations since the invasion began on February 24.

“This could be a long and difficult battle but the American people will be steadfast in our support for the people of Ukraine,” Biden said. “We’re going to continue to have their backs.”

Biden also raised the battle of rhetoric with Vladimir Putin, labeling the Russian president a “criminal war” attacks for the first time, after Russian forces sharply stepped up their civilian populations. Ukrainian authorities said the Russian military on Wednesday had bombed a theater in the besieged city of Mariupol where hundreds of civilians had been sheltering.

According to the Russian state news agency Ria Novosti, the remarks were criticized by Dmitry Peskov, Putin’s spokesman, who called them “unacceptable and unforgivable rhetoric by the leader of a country from whose bombs hundreds of thousands of people have died”.

US media reported that the drones to be sent to Ukraine are small Switchblade systems that can be carried into a battle zone and operated by a person on the ground. Washington does not plan to send American contractors to help operate them, the US official said.

Lloyd Austin, the US defense secretary, is also trying to convince Slovakia and Bulgaria to send Ukraine Soviet-era long-range anti-aircraft systems that Zelensky had requested.

Austin is due to meet this week with his Slovakian and Bulgarian counterparts at an emergency Nato gathering in Brussels. Both countries have the S-300 anti-aircraft systems, which Ukrainian forces are trained on, in their arsenals.

The renewed US effort came after Zelensky’s dramatic appeal, which began with a call for Americans to remember the Pearl Harbor and September 11 2001 attacks — saying “our country is experiencing the same thing every day now.”

He also showed a video of Ukrainian cities before and after Russia’s shelling, including footage of missile attacks on civilian targets. He called on the US to impose more economic and financial sanctions on Moscow, and for corporate America to cut off ties with Russia in order to limit Putin’s ability to fund the war. 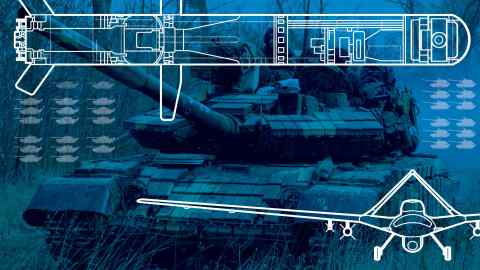 US lawmakers greeted Zelensky with a standing ovation for his virtual address, which left many members of Congress moved to tears.

Democrats and Republicans said more needed to be done to back the Ukrainian effort, though there remained a range of suggestions about what form that support should take.

Mark Warner, the Democratic senator who chairs the Senate intelligence committee, said after Zelensky’s speech: “We should heed President Zelensky’s call for additional defensive aid including anti-tank weapons and anti-aircraft missiles, and for new sanctions on those responsible for supporting the Russian government’s barbaric invasion of a peaceful and sovereign neighbor.”

Ben Sasse, the Republican senator from Nebraska, said Zelensky had called on the White House and Congress to “answer whether we have the courage of our convictions”, and urged fellow lawmakers to authorise more military support to Ukraine. We’re a superpower. We should act like it,” Sasse added.

In a fact sheet, the White House said the military aid approved by Biden was worth $800mn, in addition to $200mn authorised a few days ago.

In addition to the 100 drones, the package includes 800 Stinger anti-aircraft systems, 9,000 anti-tank weapons and small arms such as grenade launchers, machine guns and pistols along with ammunition.