Sri Lanka has increased fuel and transport prices, a long-flagged move to combat its debilitating economic crisis, but the hikes are bound to exacerbate galloping inflation, at least in the short term.

Power and energy minister Kanchana Wijesekera said in a message on Twitter on Tuesday that petrol prices would increase by 20-24 percent while diesel prices would rise by 35-38 percent with immediate effect.

“Cabinet also approved the revision of transportation and other service charges accordingly,” he said.

(1) Fuel Price will be revised from 3am today. Fuel pricing formula that was approved by the cabinet was applied to revise the prices. Price revision includes all costs incurred in importing, unloading, distribution to the stations and taxes. Profits not calculated and included.

Wijesek said also that people would be encouraged to work from home “to minimize the use of fuel and to manage the energy crisis” and that public sector officials would work from office only when instructed by the head of the institution.

Food and transport price increases will flow through to food and other goods, economists said.

Annual inflation in the island nation rose to a record 33.8 percent in April compared with 21.5 percent in March, according to government data released on Monday.

Sri Lanka is in the throes of Its worst economic crisis since independenceas a dire shortage of foreign exchange has stalled imports and left the country short of fuel, medicines and hit by rolling power cuts.

The financial trouble has come from the confluence of the COVID-19 pandemic battering the tourism-reliant economy, rising oil prices and populist tax cuts by the government of President Gotabaya Rajapaksa and his brother, Mahinda, who resigned as prime minister this month.

Economists have said fuel and power price hikes will be necessary to plug a massive gap in government revenues, but agree that it will lead to short-term pain.

Dhananath Fernando, an analyst for Colombo based think-tank Advocata Institute, said prices of petrol have soared 259 percent since October last year and diesel by 231 percent. Prices of food and other essential goods have surged, he said.

“Poor people will be most affected by this. The solution is to establish a cash transfer system to support the poor and increase efficiency as much as possible.”

Prime Minister Ranil Wickremesinghe, appointed in place of Mahinda Rajapaksa earlier this month after violence broke out between government supporters and the protesters, said last week: “In the short term we will have to face an even more difficult time period. There is a possibility that inflation will increase further.”

The price hike comes at a time when Sri Lanka has hired heavyweight financial and legal advisers Lazard and Clifford Chance as it prepares for the difficult task of renegotiating its debts, Reuters reported, citing three unnamed sources as the talks are still private.

Spokespeople from Sri Lanka’s cabinet and Lazard, which has handled debt talks for dozens of crisis-strained countries in recent years, did not immediately reply to requests for comment while law firm Clifford Chance declined to comment.

Experts and economists have been waiting for the appointment as the country looks to restructure more than $12bn of overseas debt that had been building up for years but became unsustainable when COVID-19 hammered the economy. 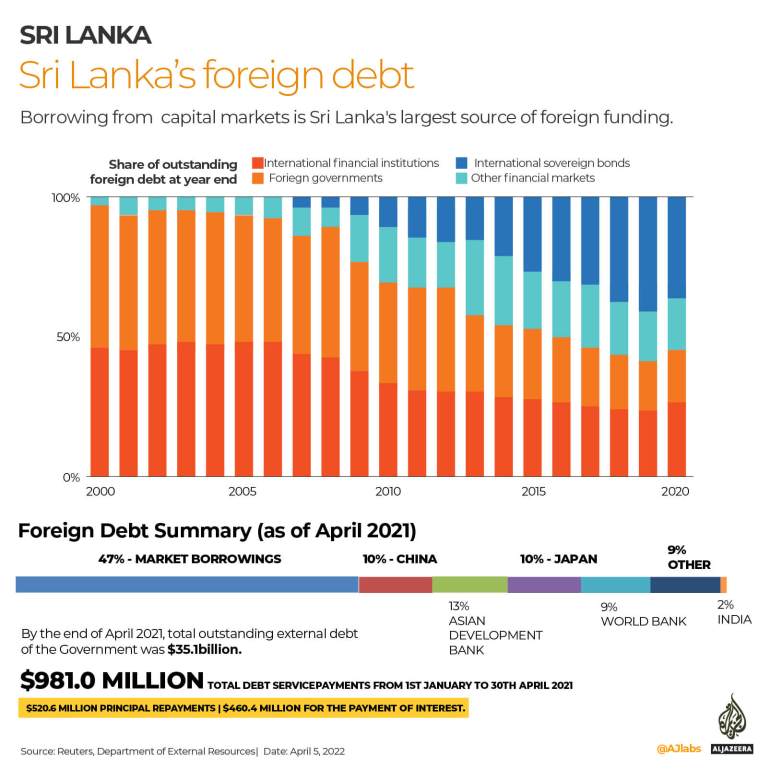 “By far the most important thing is to what extent the government will have the political will, and the ability, to deliver on the pre-conditions for the IMF programme,” said Gramercy’s co-head of sovereign research & strategy, Petar Atanasov.

“Governments are often willing to do the things that are required when their backs are completely against the wall.”

While there are hopes a deal can be struck to ease the economic crisis, it is unlikely to be straightforward.

A mix of loans from China, India and Japan, as well as all the bonds held by private investment funds mean long-resisted but now embraced talks with the International Monetary Fund (IMF) could be complex, especially if social unrest worsens.

A group of Sri Lanka’s largest dollar bondholders have hired Rothschild as its financial advisor and another legal firm, White & Case, as its legal advisor.

“I think the new cabinet would really have to show quick solutions to really pressing problems such as electricity and importation of goods to pacify the people,” said Carlos de Sousa, an emerging market strategist at Vontobel Asset Management which Sri Lanka’s bonds.

“They will try, but it is not clear to me whether they will be sufficiently successful. We will see.”