Raucous gatherings, drunken fights, drinking to excess, red wine spilled on a wall, a broken children’s swing: the Sue Gray report paints a wild picture of life inside Downing Street when the rest of the UK was under strict lockdown rules.

Gray was careful to avoid criticizing individuals in her 37-page document, instead pointing at broader “failures of leadership and judgment” in Downing Street and the Cabinet Office.

“The senior leadership at the centre, both political and official, must bear responsibility for this culture,” the report said.

page by page, the report outlined not only how illegal parties were taking place but also that senior figures knew they could be bending or breaking the rules.

On one occasion Martin Reynolds, principal private secretary to Boris Johnson, sent an email to 200 people inviting them to a drinks party in the Downing Street garden on May 20 2020.

In response, a colleague warned: “Press conference will probably be finishing around that time, so helpful if people can be mindful of that as speakers and cameras are leaving, not walking around waving bottles of wine.”

Some time later Reynolds wrote to another colleague referring to the May party: “Best of luck — a complete non-story but better than them focusing on our drinks (which we seem to have got away with).”

On another occasion, Lee Cain, then head of Downing Street communications, warning Reynolds during an exchange about gatherings planned for June 18 2020 that the idea of ​​a party could be a mistake. “I’m not sure it works at all to be honest . . . It obviously comes with rather substantial comms risk,” Cain wrote.

Ahead of the gatherings, one official wrote sardonically to colleagues: “Martin (Reynolds) and Stuart (Glassborow) would like to do speeches tomorrow when we have our drinks which aren’t drinks.”

Culture of partying in Downing Street

Gray’s report revealed details of a dizzying array of gatherings at Downing Street and its environs.

At an event on December 18 2020, which involved up to 45 people in the Number 10 press office, Gray noted there was a raucous atmosphere with people drinking “excessively”.

“The event was crowded and noisy, such that some people working elsewhere in the Number 10 building that evening heard significant levels of noise coming from what they characterised as a party in the press office,” she wrote.

A cleaner who attended the room the next morning found red wine spilled on one wall and on several boxes of photocopier paper, the report said. It noted that staff at Number 10 repeatedly showed a lack of respect towards security and cleaning staff.

Two gatherings took place on June 18 2020. The first took place in Number 10 in the Cabinet Room and lasted up to an hour. The second, which took place in the cabinet secretary’s rooms at 70 Whitehall, involved “alcohol, food and music” and lasted several hours.

Helen MacNamara, deputy cabinet secretary — who was responsible for Whitehall ethics and propriety — attended for part of the evening and even provided a karaoke machine.

“There was excessive alcohol consumption by some individuals,” the report said. “One individual was sick. There was a minor altercation between two other individuals.” The last member of staff left this gathering at 3.13am.

At one gathering on April 16 2021 — the eve of Prince Philip’s funeral — the report recounts how staff partied until the early hours of the morning.

“Exit logs indicate that some left after midnight and others between 01:45-02:45am. Two members of staff stayed later still, with one leaving at 03:11am and the last leaving at 04:20.”

The report could prove politically damaging for Johnson given its portrayal of a Bacchanalian culture in Number 10 while millions of people were locked down in their homes. But some of the report’s conclusions could be helpful for the prime minister.

For example, Gray confirmed that Johnson was not aware in advance of the gathering to mark his 56th birthday on June 19 2020 — for which he received a fixed penalty notice.

“He returned from an external visit to Number 10 Downing Street at approximately 14.20 and was taken into the Cabinet Room which had been set up with sandwiches, snacks, soft drinks and cans of beer,” the report said. Johnson, his wife Carrie Johnson and chancellor Rishi Sunak were all fined £50 for attending this event.

Likewise Gray ruled that it was “not appropriate or proportionate” to investigate a gathering held on November 13 2020 in Johnson’s private apartment above Number 10 after the departure of former chief of staff Dominic Cummings.

Gray said she did not look further into the gathering because the Metropolitan Police force had begun work on its own inquiry into rule breaking throughout Whitehall. 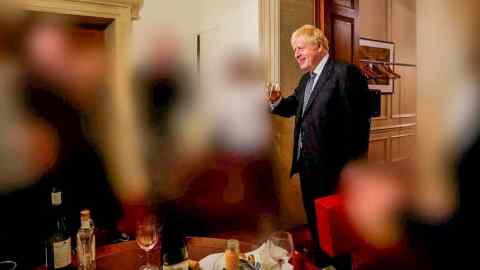 Critics have noted that the Met appears to have handed out more fines to junior members of staff than their bosses — including Simon Case, head of the civil service, who has not been fined at all.

Gray noted that younger staffers had often been following the lead of their superiors when they attended boozy parties.

“I do offer a reflection: while there is no excuse for some of the behavior set out here it is important to acknowledge that those in the most junior positions attended gatherings at which their seniors were present, or indeed organised,” she said. “I hope this will be taken into account in consideration of any disciplinary action.”