Andrey, a young car mechanic, was walking through the city of Horlivka in separatist-controlled Ukraine with his friend Elena in late March when they were stopped by a military conscription officer who thrust call-up papers into his hands.

Within a week, Andrey, who had no military experience, was on the frontline fighting alongside Russian troops in Moscow’s confrontation with Ukraine. “I don’t know where he is now,” Elena said. “I don’t even know the unit number. He rarely called . . . then there was no longer any contact with him.”

Russia has not introduced mass mobilization of fighting age men since invading Ukraine on February 24, because it has not officially declared itself at war with its neighbor. But the conscription has been in force in Ukraine’s pro-Russia breakaway enclaves, the so-called Donetsk and Luhansk People’s Republics in the south-eastern Donbas region, since the start of what Moscow calls a “special military operation”. Previously only some men were called for military service, with many exemption.

Russia appears to be relying heavily on conscripts from the breakaway regions in the absence of its own full mobilisation, some analysts say.

In recent weeks, the separatist authorities have reportedly intensified the call-up, with residents saying men with no military experience are regularly plucked from the streets and immediately sent to the front. The escalation, and rising casualty rates, have begun to spark anger even among pro-Russian communities.

Several videos posted online purportedly show the wives of Donetsk and Luhansk conscripts demanding why assistance for their husbands and asking men with no military background are being sent to fight.

“They were not people obliged for military service, so how did they end up there?”, one woman can be heard asking an official who had been intercepted by a group of women in the street. “There wasn’t even a medical check, sick men were taken!” another says.

At least one chat group on the Telegram messaging app shares tips about the location of roving conscription patrols so people can avoid them. Men advise each other to remain at home as much as possible.

A mother living in Donetsk said in an interview that her son had initially avoided conscription because he had previously completed his military service.

“He wasn’t the fighting type,” she said, recalling he would tell her: “Mum, I just can’t kill a person.” But in April, she said, he was picked up off the street, put on a bus and driven to the conscription office, with time only to call his mother and ask her to bring him some personal belongings. “They drove him to the conscription office, changed his clothes, changed his shoes and drove him to the base and then to the fighting,” she said.

He was killed a few weeks later. “I think he probably didn’t kill anyone, in the end,” she added. “He didn’t get the time.”

The center of the war has shifted to the eastern Donbas since Russia pulled its forces back from northern Ukraine and Kyiv in April to focus on solidifying its occupation of the country’s south-east. Separatist forces have been heavily.

Russia seems to be looking at Donetsk and Luhansk conscripts to make up for some of its own personnel limitations, given it has not mobilized its own population, said Rob Lee, senior fellow at US-based think-tank the Foreign Policy Research Institute.

Russian president Vladimir Putin has portrayed the current stage of the war as a fight for the “liberation” of the Donbas from the “Kyiv regime”. But the high level of consequences among fighters from Luhansk and Donetsk could raise questions about Moscow’s motives, said Lee.

“How much was this about taking care of the Donbas and how much was it, in reality, a case of putting [the breakaway regions] at a lot of risk to achieve a Russian foreign policy goal, at their expense?” he said.

At least two videos have emerged that appeared to show separatist military units addressing their leaders and refusing to fight. The videos show apparent commanders blaming their reluctance on the fact many troops are inexperienced conscripts, although the Financial Times was unable to confirm the veracity of the footage.

“More than 90 per cent of the people here have not fought at all. . . it was the first time they had seen a Kalashnikov,” one apparent Donetsk unit leader says.

“For three months we lived like bums with submachine guns, and now they want to throw us back into the meat grinder,” he adds, insisting he and more than 200 other soldiers refused “to go to the slaughter.” 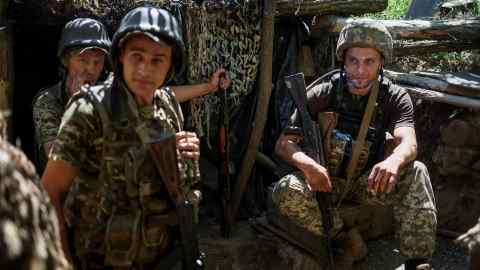 Russia has sought to minimise the amount of public information about the cause among its own troops in Ukraine. Regional media had previously published details of consequences from their own communities. But last week a Russian court ruled that disclosing any information about the country’s military losses, including names and personal details of soldiers killed in battle, would be considered illegal.

The Russian defense ministry last announced a death toll in late March. At the time the official figure was 1,351, but local located, who said they had kept an independent tally, maintained the true number was at least two and a half times higher. The UK’s defense ministry puts the current number at up to 20,000.

The number of dead from Donetsk and Luhansk remains unclear. “For me, the fate of these people is the most tragic,” one activist, who asked to remain anonymous, said. “No one remembers them [officially] at all, no one counts them.”

On several Donetsk and Luhansk social media groups, relatives have been driven to search for information about the missing themselves, sharing photos and details of identifying features. Occasionally, handwritten lists are posted with the names of injured soldiers in hospitals.

The posts contain harrowing comments. “He’s dead . . . I served with him,” one man wrote beneath a photo of a missing Donetsk fighter posted by his sister.

“Everybody is getting called up, we’re going to be left without a future,” somebody wrote under the memorial post for a former karate teacher killed last week. “Teachers are dying, sports coaches, tractor drivers,” wrote another. “What will our future look like? Rest in peace.”

Video: Volodymyr Zelenskyy: ‘No one is humiliating Ukraine.’ They are killing us’