Boris Johnson on Thursday convened one of the most surreal cabinet meetings in British history, just hours after he announced he was quitting as Conservative party leader.

The cast sitting around the coffin-shaped table were the last vestiges of Johnson’s ministry, the survivors in a political disaster movie, the people charged with keeping the show on the road.

Johnson, who will continue as a lame duck prime minister until a new Tory leader is chosen in September, urged his shell-shocked caretaker cabinet to carry on “delivering for the British people”.

But the line-up of ministers told the story of a chaotic collapse of Johnson’s premiership this week, which started on Tuesday with the resignations of chancellor Rishi Sunak and health secretary Sajid Javid.

It culminated in more than 50 Conservative MPs quitting government posts as Johnson tried to cling on to power, claiming that he had a personal “mandate” from 14mn Tory voters from the 2019 general election. Several MPs claimed their leader was morphing into a British version of Donald Trump.

After some frantic phone calls, Johnson managed to assemble enough ministers to convene what will be his final cabinet. There was Nadhim Zahawi, Sunak’s replacement as chancellor, who told Johnson to step down only 24 hours after getting the job.

Nearby was James Cleverly, Johnson’s third education secretary in three days. Also in attendance was attorney-general Suella Braverman, who launched her bid for the Tory leadership on Wednesday even before Johnson had quit.

Michael Gove, Johnson’s old partner in the 2016 Brexit campaign, was not there. He had been sacked by the prime minister on Wednesday night, a departure accompanied by a Number 10 briefing that the ex-levelling up secretary was “a snake”.

Jacob Rees-Mogg, the Brexit opportunities minister and a Johnson loyalist, said the prime minister should use his last two months in office to reverse a £5bn windfall tax on the oil and gas sector, introduced by Sunak “the much-lamented socialist chancellor “.

Johnson sighed. He explained that while he wanted ministers to deliver on existing promises, he and his cabinet were stripped of the authority to advocate “major changes of direction or policy”.

The prime minister will now stagger on until September, but he can at least look forward to a wedding party at his official country residence at Checkers on July 30 to belatedly celebrate his marriage to Carrie.

After that Johnson’s celebrated financial problems are likely to soon disappear as he embarks on a new career, expected to feature well remunerated journalism, book-writing and — above all — speech making.

Johnson, who appointed Pincher to the post in February, claimed he had not known about the MP’s previous history as a sexual predator. It was not true. The lie gradually unraveled over the next five days.

For many ministers and MPs, including the ones sent out to repeat the untruths on Johnson’s behalf, it was the final straw. “Enough is enough,” said Javid, in a devastating resignation speech on Wednesday.

Johnson tried to tough it out, telling a delegation of formerly loyal cabinet ministers on Wednesday he would not follow their advice to quit with dignity. The Sun newspaper’s front page on Thursday morning said Johnson had warned Tory MPs they would have to “dip their hands in blood” to get rid of him. 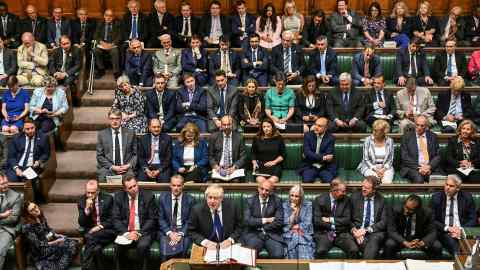 Julian Smith, former Conservative chief whip, was not alone in fearing that Johnson was entering a dark place. “He has obviously looked across the water at what Trump did last year and decided he wanted to have some mini version in the UK,” said Smith.

Andrew Griffith, his policy chief, had been busy drafting a long-awaited speech on the economy which a desperate Johnson thought might help to pacify Tory rebels and save his premiership.

The speech, Griffith confirmed, would have promised to reverse Sunak’s planned increase in corporation tax from 19 per cent to 25 per cent and cuts to income tax. Griffith worked on the speech late into Wednesday night.

Sunak had warned that such proposals were fiscally irresponsible and likely to fuel inflation. His resignation letter cited the “fundamental” difference in approach between the two Downing Street neighbors.

But by Thursday morning, Johnson’s allies said the prime minister realised “the game was up”. Having slept on the issue, he got up early and began drafting a resignation statement and told his inner circle of his plan over coffee and bacon sandwiches.

Ministerial resignations continued to flood in. Johnson quickly told Sir Graham Brady, chair of the 1922 committee of backbench Conservative MPs, of his intention to step down as party leader.

Johnson’s planned economic speech was canned and in the aftermath of his resignation, senior Tory MPs warned the caretaker prime minister not to even think about changing government policy in his last weeks in office.

Buckland told Sky News: “This prime minister no longer has the authority to do new things. This is a caretaker government.”

Some Conservative MPs, including ministers who resigned this week, believe Johnson should leave Downing Street immediately, arguing his character and integrity were so flawed that he should not spend another day in charge.

Sir John Major, former prime minister, said it was “unwise” to leave Johnson in Number 10. But ultimately Tory MPs concluded the 1922 committee, which oversees party rules, had no realistic levers to pull to remove him quickly.

One option might have been to compress the timetable for the Tory leadership contest, by the choice of Johnson’s successor leavingor exclusively to MPs. Under current rules, the party’s 100,000 members select the leader from a two strong shortlist chosen by MPs.

Johnson announced his intention to quit as Tory leader but stay on as interim prime minister in an unapologetic statement in Downing Street at lunchtime.

His speech was defiant and accusatory. He suggested he had done nothing wrong but was instead the victim of “relentless sledging” and an “eccentric” decision by Tory MPs to get rid of him.

Inside Number 10 Johnson spoke on the phone to Volodymyr Zelenskyy, Ukraine’s president, with whom he has struck up a genuine friendship following Russia’s invasion. Zelenskyy told the outgoing British premier: “You’re a hero in Ukraine, everybody loves you.”

But beyond the security gates at the end of Downing Street, a crowd had assembled to jeer the prime minister as he made his resignation speech. A little further down Parliament Street, Tory MPs were already debating who should be the next Conservative leader. After three years in power, Johnson had lost his party and his country.