The body of the former Japanese prime minister Shinzo Abe was taken to his home in Tokyo on Saturday as the nation mourned the death of its longest-serving prime minister and the country’s most consequential modern leader.

Abe, aged 67, was shot twice while giving a campaign speech in the city of Nara on Friday. His assailant was detained by the police.

Crowds gathered on Saturday to lay flowers and offer prayers at a makeshift memorial near the site of the shooting. A family funeral is expected to take place on Tuesday and a government memorial service will be held at a later date, according to an official at Abe’s office.

The incident shocked a nation where political violence has been rare in recent decades and few people own guns. Abe remained an influential figure As head of the ruling party’s largest faction after he stepped down from the premiership.

“I don’t think I would have been this shocked if it was any other politician. But Mr Abe held influence not only in Japan but overseas as well so I feel both shocked and saddened,” said Yuko Asano, a paralegal living in Tokyo.

As Abe’s body was driven from Nara to Tokyo, about 375km away, Condolence flowed in from world leadersmany of whom knew the former prime minister personally during his second term in office from 2012 to 2020.

State broadcaster CCTV quoted Xi as saying he and Abe had “reached an important consensus” on their countries’ relations. “I would like to work with the prime minister [Fumio Kishida] to continue to develop the good neighborly, friendly and co-operative relations between China and Japan,” Xi added.

Security officials K metal detectors on Saturday as gave a speech in Yamanashi prefecture on the final day of campaigning for elections to Japan’s upper house on Sunday.

The ruling Liberal Democratic party was already expected to perform strongly in Sunday’s polls, but analysts said Kishida may draw additional sympathy votes because of Abe’s death. “We must show that our democracy will not yield to violence,” the prime minister said.

Earlier in the day, he held a 10-minute phone call with US president Joe Biden, in which the leaders pledged to inherit “former prime minister Abe’s will” to strengthen the bilateral alliance. 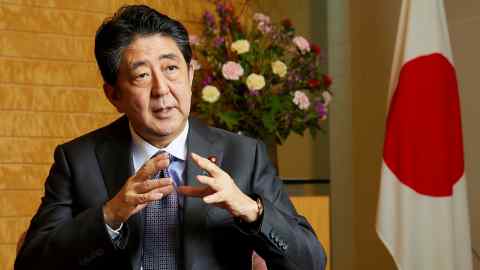 Japanese police continued to hunt for more information about the motives of Abe’s assassin.

Local police said the suspect, 41-year-old Tetsuya Yamagami, claimed to hold a grudge against a “particular group” with which he believed Abe had a close relationship, according to a state broadcaster NHK. Police did not name the group.

Abe, a conservative nationalist, had links with a number of religious organizations that gave him political support.

Yamagami served in Japan’s Maritime Self-Defense Force from 2002 to 2005.