Amazon is increasing prices for its Prime membership scheme across its major European markets, several months after raising fees for US customers, in a move intended to offset the ecommerce giant’s operating costs.

In Germany, Amazon’s The biggest market outside of the US, membership costs will increase 30 per cent, while Prime members in France will pay 43 per cent more for perks such as faster delivery and Amazon’s online entertainment. Increases will also be applied in Spain and Italy.

The are steeper than the 17 per cent jump in the Prime membership price that came into effect for new US subscribers in February.

For UK customers the price of an annual subscription will increase 20 per cent from £79 to £95 a year. The price will go from £7.99 to £8.99 per month for those paying in monthly installations.

A spokesperson attributed the move to “increased inflation and operating costs.” The changes will go into effect on September 15.

An Amazon spokesperson noted it was the first time since 2014 the company had raised the cost of Prime in the UK. According to research group Insider Intelligence, the UK has at least 27mn Prime members. It is estimated that penetration among the UK population surpassed 50 per cent in 2021. It projects 32.2mn Prime subscribers in the UK by 2024.

Amazon had not previously confirmed plans to implement Prime price rises outside of the US.

“Amazon raising the price of Prime membership is unsurprising given recent inflation — and that it already pulled this lever in the US six months ago,” said Andrew Lipsman from Insider Intelligence. “While the timing of this price hike will be met with more grumbles than it would’ve been in February, consumers will ultimately shrug off the increase since Prime remains a great value.”

The price increase comes as the $1.2tn ecommerce and cloud giant faces soaring costs in its retail business — a result of supply chain strains, overstaffing and an overexpansion of warehousing space during the coronavirus pandemic.

Meanwhile, Amazon is spending big on acquiring content for Prime Video, its answer to Netflix. The company has splashed out on rights to the Premier League broadcast and Champions League footballas well as the creation of a new Lord of The Rings TV series. Earlier this year Amazon closed its $8.45bn deal to take over film studio MGM.

Prime members are crucial to driving Amazon’s profit margins, as they typically spend more money on the site, and shop more often, than regular customers. But the principle — free delivery one or two days — has become increasingly expensive for the company to maintain as the price of fuel and other costs has rocketed.

After going through much of the peak pandemic period soaking up much of that pressure, the company has more recently started passing on some costs to sellers and customers. In addition to the Prime price rise in the US, in April it instituted a 5 per cent fuel surcharge on deliveries in that country.

Operating costs for Amazon’s international business — excluding its AWS cloud division — increased in the January-March period from $29.4bn to $30bn, with the segment swinging from a $1.3bn operating profit for the quarter in 2021 to a $1.3bn loss in 2022. 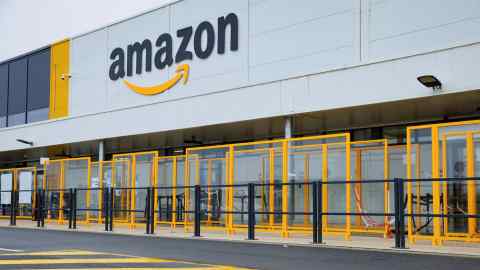 Amazon is set to report earnings for the April-June period on Thursday. Its stock is down by more than 30 per cent since the start of the year, part of the broader sell off of Big Tech stocks.

On Monday, Amazon’s shares fell around 4 per cent in after-hours trading following a profit warning from Walmart, its primary retail competitor in the US. Walmart said inflation was hurting its shoppers and predicted adjusted earnings per share for the full year would decline as much as 13 per cent. Shares in other retailers, such as Target and Costco, also fell on the warning.