The battle for India’s fifth-generation airwaves is luring some of the country’s richest tycoons, with billionaires Mukesh Ambani and Gautam Adani joining a raft of players expected to bid as much as $14 billion for frequency rights that could decide who dominates the digital era.

While Ambani’s Reliance Jio Infocomm Ltd. has paid the highest pre-auction deposit signaling it’s likely to be the most aggressive bidder in the sale that starts Tuesday, it is the surprise entrant Adani Data Networks Ltd. His bids will be closely watched as rivals try to map out its telecom ambitions. Wireless operators Bharti Airtel Ltd., led by billionaire Sunil Mittal, and Vodafone Idea Ltd. — a joint venture between Vodafone Group Plc and Kumar Mangalam Birla’s group — are the other bidders.

The airwaves sale could raise as much as 1.1 trillion rupees ($14 billion), according to a June estimate by local rating company ICRA Ltd. The empire of Adani, who overtook Ambani as Asia’s richest man earlier this year, is downplaying its foray into a new playing field for the group. It said its interest in 5G waves is about “private network solutions” and enhancing cybersecurity at the firm’s airports and ports, with no intention of entering the consumer mobile space currently dominated by Ambani.

Still, the move comes as the two men tread the same ground, with Adani in particular making investments in sectors traditionally associated with Ambani, who disrupted India’s telecommunications industry almost six years ago with Reliance Jio’s ultra-cheap services. India is at a crucial juncture in its digital development, with many companies — including multinationals like Amazon.com Inc and Walmart Inc — vying for a piece of the intersection between mobile and the nascent e-commerce landscape. 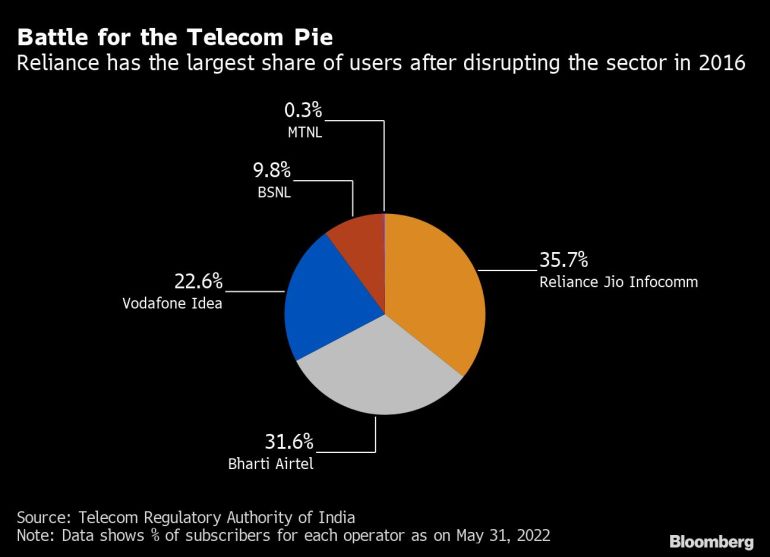 Speculation that 5G is set to become a flashpoint between Ambani and Adani was quelled somewhat, however, when Adani Data paid only 1 billion rupees as a deposit for the auction. The payment is widely viewed by brokerages as a key indicator of the level of interest by a bidder.

Adani Data’s small deposit, which was in line with its announcement to create only a private 5G network and not become a full-fledged wireless operator, helped defray some of the anxiety among industry incumbents. Reliance Jio deposited 140 billion rupees, significantly higher than Bharti Airtel’s 55 billion rupees and Vodafone Idea’s 22 billion rupees, according to data provided by the government.

“Whether it is Adani or Ambani, India will benefit from a massive 5G roll out,” said Utkarsh Sinha, Managing Director, Bexley Advisors, a boutique investment banking firm. “Adani’s entrance has shaken up entrenched Reliance Jio and the massive earnest money commitment shows that they see the 5G value proposition and can’t afford to lose out on it.”

The auctions will be a financial boost for Prime Minister Narendra Modi’s government, which is trying to tame inflation and rein in the fiscal deficit. The South Asian nation plans to sell 72 gigahertz of airwaves for a 20-year tenure in various frequency bands ranging from 600 megahertz to 26 gigahertz. India has also allowed firms to pay in 20 equal installments with no upfront payment as it tries to catch up with other countries, such as South Korea and China, that have had 5G networks for years.