In the 2022 midterm electionsvoters in the United States will elect governors, the highest state-level officials, in nearly two-thirds of the country.

The winners of the November 8 midterm elections in 36 of the 50 US states are poised to shape the political landscape of the country in the years ahead.

In some key states, governors will have outsized influence over issues that have defined this election season, including the legality of abortion. That comes after Supreme Court’s Roe v Wade ruling returned the question of the legality of the procedure to state governments.

Governors could also have a profound effect on the presidential vote in 2024, as they wield the ability to sign or veto legislation related to elections or, in some cases, appoint top election officials.

Here are the gubernatorial races to watch:

Arizona became a hotspot of election misinformation in the wake of the 2020 presidential race. Two years later, it has emerged as a key battleground for proponents of former President Donald Trump’s unfounded claims the poll was marred by fraud. Meanwhile, a state judge’s September decision to reinstate an 1864 abortion ban has injected new urgency into the race.

Democratic gubernatorial candidate Katie Hobbs, currently Arizona’s secretary of state, oversaw the 2020 election administration in the state and was a key defender of the process’s integrity. On the trail, she has emphasized her support for abortion rights.

Her opponent is Trump-endorsed Republican, Kari Lake, a former television anchor who maintains the 2020 vote was badd by malfeasance. Meanwhile, she has regularly shifted in her stance, but remains broadly anti-abortion.

The pair are currently polling neck and neck.

The race is particularly significant as it runs parallel with a close contest for a secretary of state – the official who oversees election administration. The Republican candidate, Mark Finchem, has said he would not have certified the 2020 election if he were in the post at the time.

Wisconsin’s Democratic Governor Tony Evers is facing businessman Tim Michels, who has questioned the 2020 election outcome and told reporters in June he would not rule out signing a law de-certifying Biden’s victory in the state after taking office, a move that would likely be unconstitutional .

At stake, according to the Evers camp, is the “last line of defense” against a solidly Republican-controlled state passed legislature that has a slew of legislation seeking to change election policy in the state, which advocates have said would create unfair barriers to voting.

Evers has wielded the veto pen against at least 120 Republican-passed laws, including about 15 that would have changed the state’s election policies, according to a tally by Wisconsin Public Radio.

Abortion rights have also defined the race, with Evers promising to fight post-Roe v Wade abortion restrictions, notably leading a legal challenge to an 1849 law that bans abortions with no exception for rape or incest.

Michels had previously supported the 1849 law, but has since said he would support a ban with exceptions for rape and incest.

Pollsters consider the race to be a toss-up.

In Pennsylvania, Democrats are also trying to keep hold of the governor’s mansion as Republicans are projected to maintain control of the state legislature.

The race is particularly significant because in Pennsylvania the governor appoints the secretary of state, who oversees the election administration. 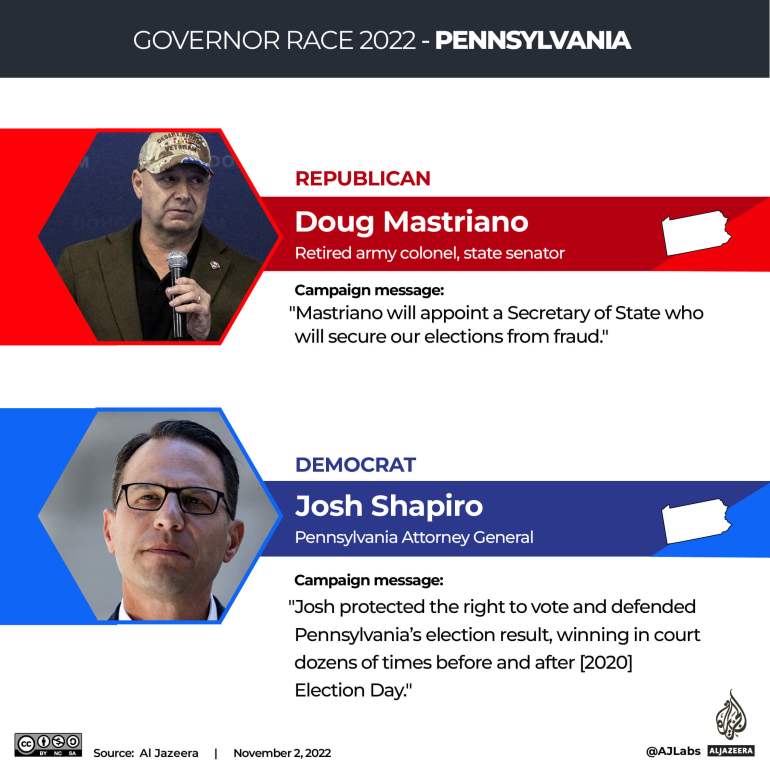 Attorney General Josh Shapiro is the party’s choice to replace incumbent Democratic Governor Tom Wolf, who will leave office due to term limits.

His opponent, Doug Mastriano, has emerged as one of the most prominent Republican firebrands of the election season.

He has repeatedly rejected the results of the 2020 vote. His campaign also spent thousands of dollars chartering buses to Washington, DC in support of Trump’s January 6, 2021 rally, an event that later turned into a riot.

The retired army colonel and current state senator has also attracted attention for his stand against gay and transgender, as well as his suggestion that anyone who violated a proposed bill that would ban abortions after about six weeks should face murder charges.

While polls showed an initially tight race, the margin appears to have widened in Shapiro’s favor as election day nears.

Oregon has long been a state dominated by Democrats, but could see a distinct pivot to the right in its governor’s race.

Polls show frontrunners – Democratic candidate Tina Kotek, the current speaker of the Oregon House, and Republican rival Christina Drazan, a lobbyist – in a dead heat. If Drazan wins, she will be the first Republican in the role since 1987.

Observers have attributed the unexpectedly tight race to several factors, including the candidacy of Betsy Johnson, a former state legislator who is running unaffiliated. She is expected to siphon potential votes from the Democratic ticket.

Writing for The Washington Post, Jim Moore, a professor of politics and government at Pacific University in Oregon, noted that issues galvanising Democrats, like abortion, are less at stake in the race. Meanwhile, the economy, homelessness and crime top voter interest polls.

It is round two in Georgia for incumbent Republican Governor Brian Kemp and voting rights activist Stacey Abrams, who nearly defeated Kemp in a shocking 2018 race.

Abrams’s effort to turn out Democratic voters in the state was largely credited with Joe Biden’s narrow presidential race victory in 2020, as well as the election success of Democratic Senators Jon Ossoff and Raphael Warnock. 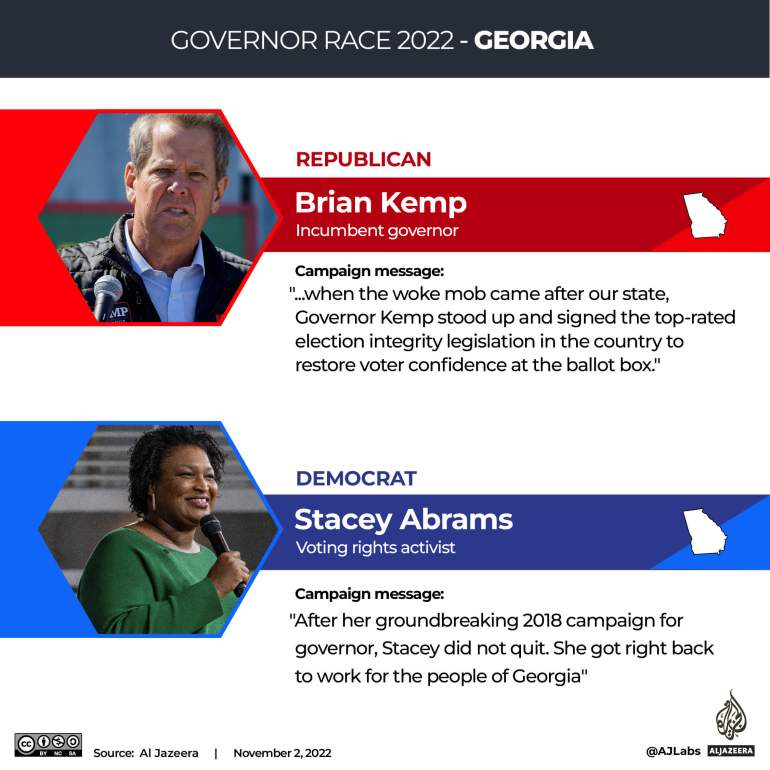 Still, polls have indicated a somewhat lacklustre performance from Abrams in recent months, with Kemp maintaining a lead in the final stretch.

Travel, the issue of abortion rights has energised the race. Kemp signed a 2019 bill that bans abortions after a fetal heartbeat is detectable. It went into effect after the repeal of Roe v Wade.

In their last debate, Abrams seized on Kemp’s silence when asked if he would support more restrictions on abortion.

The governor’s race in New York has seen a surprise tightening between Republican US Representative Lee Zeldin and incumbent Democrat Kathy Hochul. A FiveThirtyEight polling analysis showed Hochul up nearly seven points entering the final week of the election, far closer than the 18 points lead she held in July.

Hochul, who took over from Andrew Cuomo after his 2021 resignationhas the liberal credentials expected in a state where Democrats have been governor for the last 20 years.

Zeldin is an anti-abortion Trump supporter who voted against certifying the 2020 presidential election results in Pennsylvania and Arizona. He has sought to distance himself from the former president on the election, and has maintained he would not seek to change state laws protecting abortion rights.

Observers attribute his recent momentum to a campaign focus on crimes and the economy.

Beto O’Rourke became a rising star in the Democratic Party after nearly unseating Republican Senator Ted Cruz in Texas in the 2018 midterms.

With the state’s demographics shifting rapidly, Beto supporters hope he will harken in a new era in Texas, which shares an over 2,000km (1,242 miles) land border with Mexico.

O’Rourke has criticized Abbott’s busing of migrants From Texas to northern cities, his lack of support for gun control in the wake of recent mass shootings in the state, and his signing of a law that allowed private citizens to sue those who aid abortion providers.